UPDATE: Even With Implants, It Can’t Be an “Interim, Provisional Temporary”

This article is an update of the original April 2018 post. 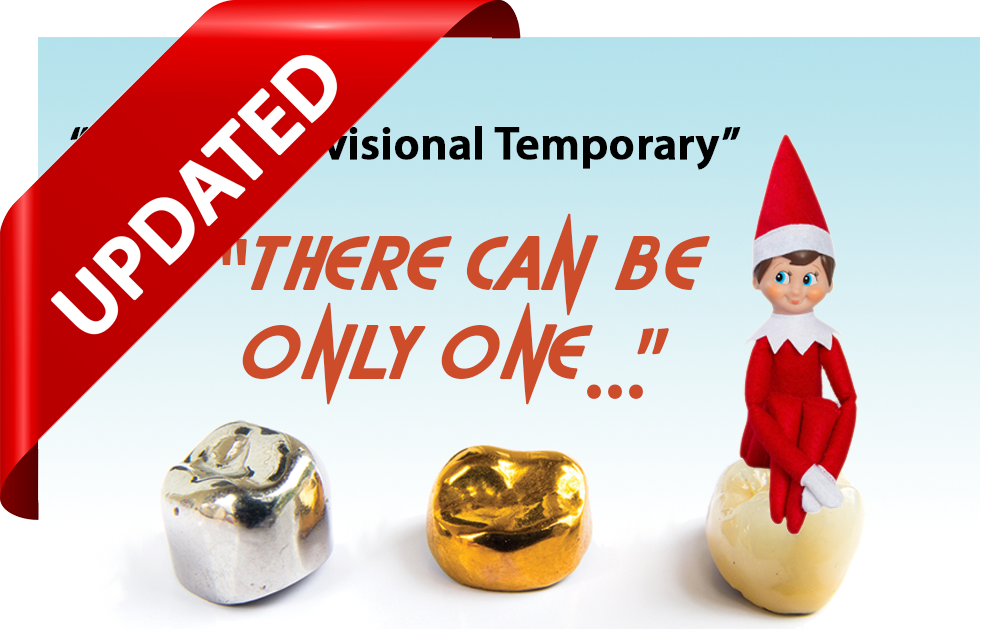 Each year, the American Dental Association, in conjunction with representation of the benefit industry, reviews and revises the Code on Dental Procedure and Nomenclature as maintained within Current Dental Terminology. The upcoming version will be effective January of 2020, at which point the committees will again continually reconsider additions as well as modifications.

It is unfortunate that many see a direct correlation between procedure coding and reimbursement. The mere existence of a code does not always justify its appropriate use as either a reporting or reimbursement mechanism. Misguided are those who teach the mantra of “code for everything you do” as when taken out of context, nothing could be further from the truth. A simpler and more concise parameter has been and continues to be the Limoli teaching of “bill for what you do but don’t code until you are finished.”

Comprehensive reimbursement and accurate coding is much less complicated with single-visit completable procedures. The procedure was initiated, completed and coded all within the single dated series of one patient encounter. The problem begins and rapidly manifests into potential patient misunderstanding, increased administrative as well as financial aggravation and potential fraud when an office feels the need to code for every subcomponent of a multi-visit procedure. Indirect or laboratory fabricated prosthetics and appliances are a classic case.

Insurance companies and plan administrators usually do not separately reimburse for temporary prosthetics or restorations, particularly if the overall completed procedure is in any way cosmetic in nature or considered to be non-covered. Provisionals and interims are another story.

Let’s take a minute and draw a clearer distinction between the use of these terms:

A “temporary” is that which is delivered in occlusion while awaiting the arrival of the final prosthesis currently being fabricated. Indicative of a temporary is the fact that no additional treatments or services, other than prosthetic delivery, are necessary or required for the tooth in question.

A “provisional” is that which may or may not be in functional occlusion due to the need for anticipated healing and/or resolution from a subsequent procedure and may very well be in need of additional diagnostic determinations. In other words — we may not know what’s actually going to be needed next.

An “interim” is that which is used for a brief period of time so as to “hold over” the condition until definitive treatment can be initiated. These solutions are generally short-lived.

In most instances where treatments are not shared between multiple doctors, offices, and/or diagnostic entities, interims and temporaries should be paid for by the patient via incorporation within the fee for the final completed procedure. All too often, if the benefit plan pays for or toward the provisionals, they are considered part of the final finished procedure. If, by chance, the benefit plan does reimburse for provisionals, then that fee will generally be deducted from the amount paid for the final restoration.

True “provisionals” are another story.

In many cases, a complex treatment plan will involve a combination of services, including not only restorative but surgical and potentially periodontal as well. Standards of care will indicate when some form of provisional will be necessary prior to the completion of the final prosthetic preparation. The primary criterion for the reimbursement of any “provisional” is that for a designated, monitored period of time (30, 60, 90, 120 days, etc.), it needs to occur prior to any continuing care decision.

If the more permanent appliance is not delivered in functional occlusion within that specified time period, benefits for the permanent crown can become unavailable until the plan’s exclusionary period has expired. In other words, the provisional administratively becomes the final for the duration of the exclusionary period stated in the contract. Conversely, temporary crowns made on the date of final impression and indirect fabrication are actually part of delivering the final prosthesis and are not identifiable by procedure code.

Interims are not provisional but they are and can be temporary — well, kind of…

By far, the best example of a true “interim” is the lowly single tooth maxillary anterior removable appliance better known as a flipper. (I’m not talking Sandy, Bud, and Porter Ricks’ aquatic version of Lassie.) Based upon the unique circumstances of the individual patient, the prosthetic could be accurately coded any number of different ways. That is why one has to be careful when asking what is assumed to be a simple question.

Implants and their associated prosthetic components are no different.

The surgical placement of an interim implant body (D6012) is most often associated with a transitional prosthesis. Use of this code specifies that no additional charge will be made to the patient for this implant removal at a later date, in conjunction with the new placement of yet another or additional implant bodies and their more final definitive restoration or prosthesis. The limited application of this code specifies that, over time, both an initial and a secondary permanent implant body are being separately placed in the same surgical access socket.

Most often an interim abutment (D6051) is utilized when the final prosthesis differs from that which was originally delivered. An example might be an over denture removable partial (D6112 or D6113) that is going to be later replaced with a definitive more traditional fixed, not patient removable, partial denture. Please understand that this code has nothing to do with healing caps as they are part of second stage implant surgery.

A provisional implant crown (D6085) is a single-unit esthetic implant covering that generally is not in occlusal function. Most often we see this code utilized when a previously placed questionable implant body is being treated to prevent potential failure and subsequent removal. The actual treatment of the associated peri-implant defect is going to be identified and coded as either D6101, DD6102, or D6103. This is not to ever be used in billing (patient, plan, or both) or identifying a temporary in conjunction with the fabrication of a definitive permanent crown.

The delivery of interim fixed partial dentures with multiple same day implant placements are becoming more commonplace. Be the initial appliance mandibular (D6118) or maxillary (D6119), please note that the code descriptors are per complete arch and not partial arch or in any way per tooth. These appliances are most often delivered in occlusal function the day of implant placement. When a benefit plan participates in the reimbursement of this initial prosthesis, it will most often deduct or deny (patient payable) and in some cases exclude (not patient payable) benefits toward the more final prosthesis.

As for traditional fixed partial denture provisional pontics (D6253) and retainer crowns (D6793), the reporting and subsequent reimbursement criteria are the same. They are not to be used for routine prosthetic services. Your clinical documentation needs to specify the nature and scope of the complication and potential future treatment needs.

Hopefully, this helps shed some light on what is and can sometimes be considered part of another completed procedure. Just because there is a code that identifies something that was done, it does not mean that the use of that code is appropriate to the individual situation. So, step back. Breathe. Bill for what you do and don’t code until you are finished.

As always, it is my honor to be of service.

This article is an update of the original April 2018 post.