It Can’t Be An “Interim Provisional Temporary” — So What Is It? 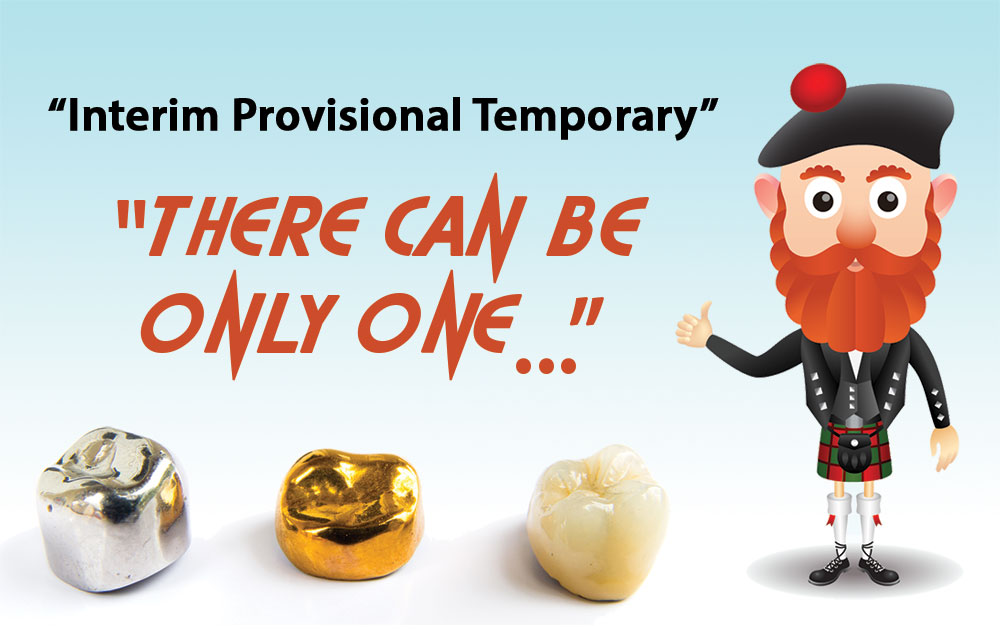 Insurance companies and plan administrators usually do not separately reimburse for temporary prosthetics or restorations, particularly if the overall completed procedure is in any way cosmetic in nature or considered to be non-covered. Provisionals and interims are another story.

Lets take a minute and draw a clearer distinction between the use of these terms:

A “temporary” is that which is delivered in occlusion while awaiting the arrival of the final prosthesis currently being fabricated. Indicative of a temporary is the fact that no additional treatments or services, other than prosthetic delivery, are necessary or required for the tooth in question.

A “provisional” is that which may or may not be in functional occlusion due to the need for anticipated healing and/or resolution from a subsequent procedure and may very well be in need of additional diagnostic determinations. In other words — we may not know what’s actually going to be needed next.

An “interim” is that which is used for a brief period of time so as to “hold over” the condition until definitive treatment can be initiated. These solutions are generally short-lived.

In most all instances where treatments are not shared between multiple doctors, offices, and/or diagnostic entities, interims and temporaries should be paid for by the patient via incorporation within the fee for the final completed procedure. All too often, if the benefit plan pays for or toward the provisionals, they are considered part of the final finished procedure. If, by chance, the benefit plan does reimburse for provisionals, then that fee will generally be deducted from the amount paid for the final restoration.

True “provisionals” are another story.

In many cases, a complex treatment plan will involve a combination of services, including not only restorative but surgical and potentially periodontal as well. Standards of care will indicate when some form of provisional will be necessary prior to the completion of the final prosthetic preparation. The primary criterion for the reimbursement of any “provisional” is that for a designated, monitored period of time (30, 60, 90, 120 days, etc.) it needs to occur prior to any continuing care decision.

If the more permanent appliance is not delivered in functional occlusion within that specified time period, benefits for the permanent crown can become unavailable until the plan’s exclusionary period has expired. In other words, the provisional administratively becomes the final for the duration of the exclusionary period stated in the contract. Conversely, temporary crowns made on the date of final impression and indirect fabrication are actually part of delivering the final prostheses and are not identifiable by procedure code.

Interims are not provisional but they are and can be temporary — well, kind of…

By far the best example of a true “interim” is the lowly single tooth maxillary anterior removable appliance better known as a flipper.* Based upon the unique circumstances of the individual patient, the prosthetic could be accurately coded any number of different ways. That is why one has to be careful when asking what is assumed to be a simple question.

If the appliance has an anticipated limited life expectancy of less than 60 days, it would be appropriately billed and subsequently coded as D5820 (interim partial denture) and worth a little over $500.

If the appliance is due to extraction or evulsion and potential relines or rebases are being anticipated, we are looking at codes D522 (immediate partial denture) and its worth around $900.

If the appliance has an anticipated life expectancy of greater than 5 years, it would be appropriately billed and subsequently coded as D5211 (resin base) or D5225 (flexible base) and worth between $1100 and $1300.

Hopefully, this helps shed some light on what is and can sometimes be considered part of another completed procedure. Just because there is a code that identifies something that was done, it does not mean that the use of that code is appropriate to the individual situation. So step back. Breathe. Bill for what you do and don’t code until you are finished.

As always, it is my honor to be of service. See you on the road.